Heading to Geneva.  The UN Human Rights Commission to present the case against the Saudi-led coalition for the use of illegal Cluster Bombs in Yemen’s densely populated civilian areas.

A short statement written to accompany a harrowing video depicting the suffering of the Yemeni people that is being largely ignored by the UN, Western Government and, of course, the Media.

Thanks to Nadia Alkotbi for the video.

Yemen.  The oldest country in the world.  Yemen has a history and a heritage spanning centuries, untouched and unspoiled until now when this history and heritage is being reduced to rubble and ashes while the world looks the other way. Its treasures are being plundered by thieves.  Its monuments are being destroyed by bombs.

Its people are being senselessly and brutally murdered in their thousands.  These deaths are unacknowledged and ignored by the International Community.  For the Yemeni people every death has a name.  Each death is a mother, a son, a daughter, a father, a friend, a neighbour.

1500 women have been killed who are somebody’s sister, mother, aunt, grandmother.  1996 innocent and terrified children have been murdered, torn apart by the merciless rain of death from the Saudi-led coalition. What is their crime?  To be born? Why must their souls be ripped from their frail bodies by Saudi aggression? Why is the world not asking this question when just one child dies, not almost 2000.

The war against Yemen is more brutal than any in history.  Evidence of the use of illegal weapons in densely populated civilian areas ensures that maximum damage is being done to civilians, non-military targets.

The illegal use of cluster bombs, that explode mid- air releasing hundreds of submunitions that can shower hell upon an area the size of a football pitch. The detonation of these bomblets and the shrapnel they scatter across a vast area will tear flesh from limbs and cause hideous injuries.  Some remain unexploded among rubble and debris, waiting to be stepped on or picked up by children when they detonate, amputating limbs, mutilating and maiming the innocent.

Cluster bombs are only one of the weapons being used against the Yemeni people.  The unilaterally endorsed blockade is ensuring starvation, deprivation and increased suffering of an entire population, already the poorest people in the region. Essential infrastructure has been deliberately destroyed, hospitals, schools, mosques, factories in an effort to destroy any chance of survival for the Yemeni people.

Misery upon misery is being brought to bear upon the people of Yemen by the oppressive, despotic Saudi regime with the complicity of its allies in NATO and the US who are supplying weapons and expertise to bring death to Yemen’s door.

What has Yemen done to deserve this?  Yemen asked for its right to decide its own future, free from the economic and political chains of corruption and colonialization.

For this legal demand, Yemen is being punished illegally and those who watch in silence or collude with this wholesale slaughter have abandoned their own humanity to a desert without conscience. 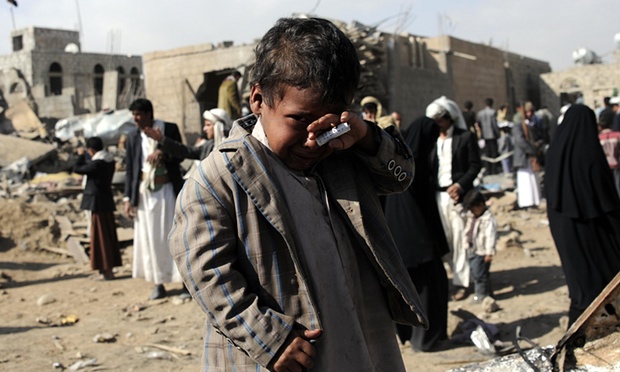