My Statement to the UNHRC on the Saudi Coalition illegal use of US supplied Cluster Munitions in Yemen and the deliberate targeting of civilian areas that constitutes a War Crime.

Good afternoon ladies and gentlemen, my name is Vanessa Beeley. I am a British independent journalist, working with Sheba Rights Coalition & Arabian Rights Watch Association to expose Saudi coalition use of illegal cluster bombs in civilian and agricultural areas in Yemen.

Yemen is the forgotten war, where war crimes and violations of International law are not being investigated by an independent enquiry commission.

In this presentation I will firstly explain a Cluster Bomb. I will then present evidence of their use by the Saudi led coalition in densely populated civilian areas in Yemen. I will conclude with our recommendations.

A basic cluster bomb consists of a hollow shell containing up to as many as 2,000 sub-munitions or bomblets.

Cluster bombs are indiscriminate weapons when used in densely populated civilian areas. When fired as rockets or dropped in air-strikes, the outer shell detonates in mid-air releasing the bomblets which are deposited across vast areas. Upon impact they explode, showering civilians and livestock with shrapnel and molten metal.

Decades after the initial bombing, these sub-munitions still have potential to do tremendous damage, often surpassing even landmines in their threat to civilians.  The majority of victims of this concealed killer are children, for whom, the bright yellow or spherical bomblets resemble toys.

The Convention on Cluster Munitions banning their use entered into force and became binding international law 1st August 2010. As of 1 October 2015.  A total of 118 states have joined the Convention.

Russia, China, US, Israel, Saudi Arabia & Yemen are non-signatories.  However US export rules specify categorically that the Cluster Bomb MUST NOT BE USED IN CIVILIAN areas.

“An obligation never to use, produce, transfer or stockpile cluster munitions.”

Rule 71 of the Convention

In February 2016 Steve Goose director of HRW said:   “These weapons should never be used under any circumstances. Saudi Arabia and other coalition members – and the supplier, the US – are flouting the global standard that rejects cluster munitions because of their long-term threat to civilians.    The Saudi-led coalition should investigate evidence that civilians are being harmed in these attacks and immediately stop using them.”

A UN Spokesperson has stated:

“The coalition’s repeated use of cluster bombs in the middle of a crowded city suggests an intent to harm civilians, which is a war crime.  These outrageous attacks show that the coalition seems less concerned than ever about sparing civilians from war’s horrors.”

More than 8143 people have been killed and over 15000 [conservative figures] others injured since the strikes began. 1996 children and 1519 women.

The Saudi war of aggression has also taken a heavy toll on the impoverished country’s facilities and infrastructure, depriving the Yemenis of their ability to sustain themselves under a punishing Saudi coalition blockade and daily brutal bombardment.

Since the beginning of the war on Yemen, Sheba Rights Coalition (SRC) has collected credible evidence that cluster bombs have been used in Yemen by the Saudi led coalition on 56 occasions.  Saada & Hajjah in the north & Taiz in the south, being the worst affected. 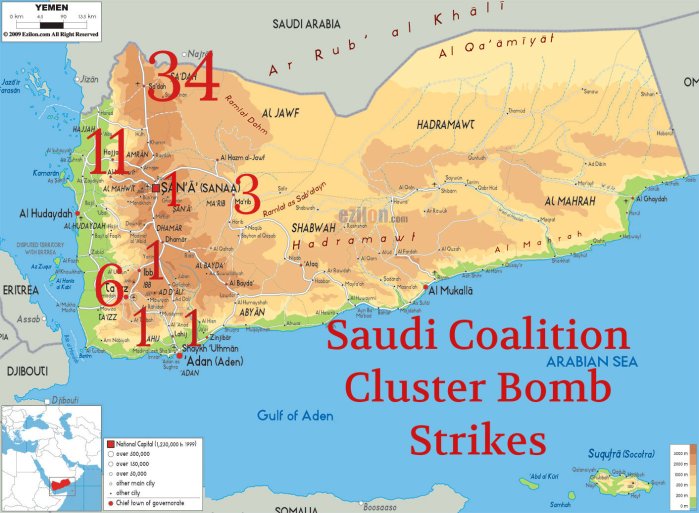 Statistics will be displayed on the screen behind me collated by various organisations including Human Rights Watch, Sheba Rights Coaltion, Yemen’s Legal Centre for Rights and Development & the National Committee to Document Saudi coalition Crimes of Aggression.

Slide one shows the number of Cluster Munition strikes by province.  Slide two and three show the air dropped and ground launched Cluster Munitions and Slide 4 shows the attacks by date, area and cluster munition type. 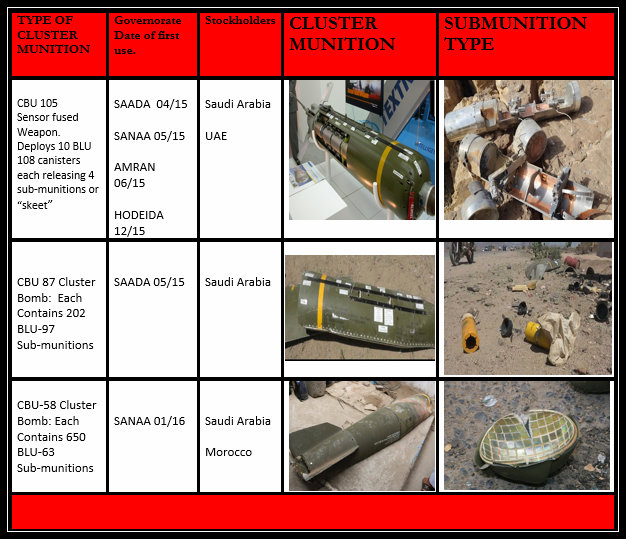 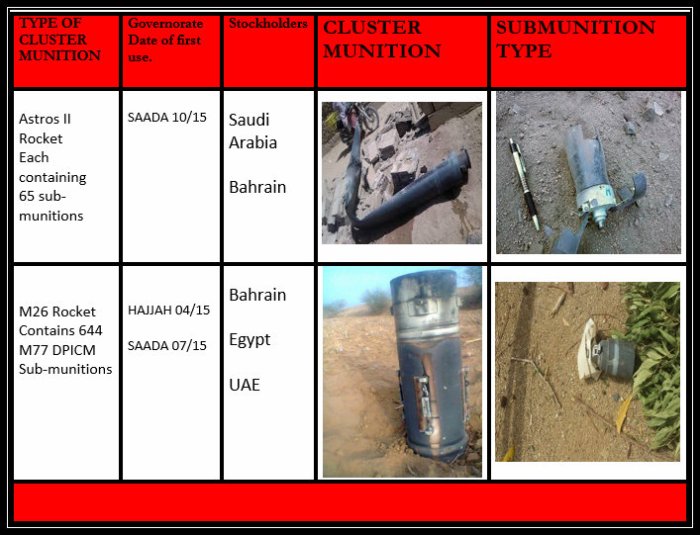 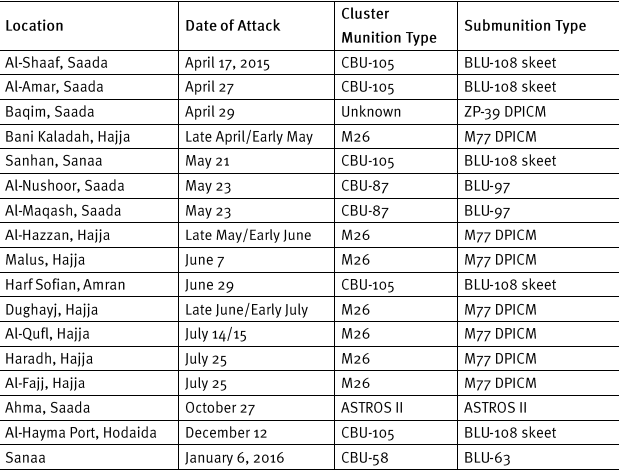 A child was killed, and ten civilians injured in the attack.

33 homes & a girls school were structurally damaged and many vehicles burned.

6th June, 2015, Saudi-led coalition jets targeted a camp for the internally displaced people in Dhughayj [Duhaij] located in the Hairan district of Hajjah province.  210 internally displaced families had set up make-shift camps in the area after having fled their homes in Haradh

The examination of the remnants of the weapons used identified them as US-made, ground-launched M26 cluster munition rockets.  Coalition members Bahrain, Egypt and the United Arab Emirates all possess M26 rockets and their launchers.    Unexploded submunitions from these missiles were also found at the scene.

5 civilians were killed and 37 others injured among them several women and children.

June 15, 2015 the coalition fired four cluster bombs on Bani Rabia in Razih district of Saada.  The bombs were strewn over a vast area that was used for agricultural purposes once again presenting a huge risk for livestock and children

On July 2, 2015 more than ten civilians were injured when cluster bombs targeted homes in al-Nadheer district, Saada.  Five homes were damaged by the strike.

On July 22, 2015 the Saudi coalition used cluster bombs  in al-Nadheer district, in Saada. Once more a reminder that for children, these bomblets resemble toys, toys that maim, mutilate and disfigure when played with.

We call upon the UN Human Rights Council to take stronger action in response to widespread and grave violations of human rights and humanitarian law in Yemen.

We urge your delegation to ensure that, during this 31st session, the UN Human Rights Council adopts a resolution under agenda item 4 to: 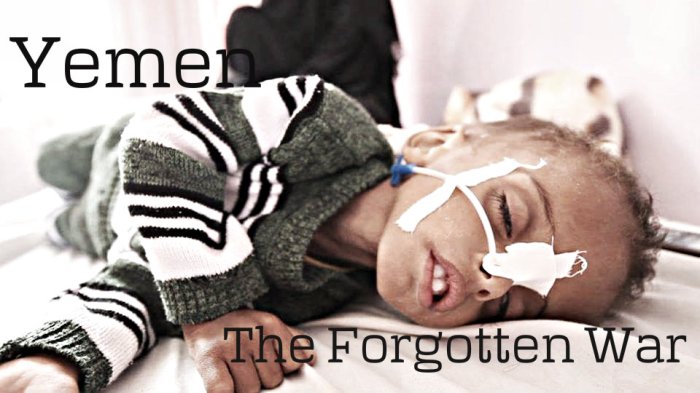