“Thus, having conducted a thorough investigation, we came to a conclusion that in the nearest future a certain Western NGO intends to stage a chemical provocation. Such an information campaign in Western mainstream media could once again discredit Assad’s forces and accuse them of using chemical weapons. So, what’s left after this is to carry out a retribution air strike for the demoralization and destruction of the SAA units, quarrels the official government with the Kurds and firmly establish control over the most significant oil fields in Syria’s Deir Ezzor.”

It’s not the first time we hear about the upcoming provocation in Syria. Following the joint US, British and French air strikes on Syria’s facilities in April, the locals wait in high anxiety and tension for new staged provocations, fake accusations of the Syrian Arab Army (SAA) and further attacks.

So far, we have only wondered where the White Helmets ‘activists’ could set up their movie studio. This scenario usually occurs in the areas where various militant groups suffer heavy losses. Currently, for terrorists, things go bad in Daraa and Idlib provinces. Fortunately, we do not witness new provocations there yet.

However, monitoring and reading numerous Middle Eastern mass media on Syria we came across an advertisement on recruiting volunteers for shooting a documentary film in Al-Hasakah province. This post was published in The Syrian Observer. 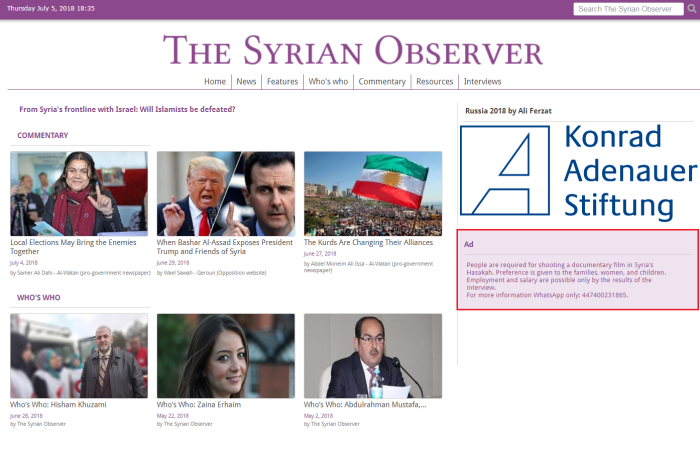 Screenshot of the ad on the Syrian Observer

It was something odd about…