March 2015 and TIME magazine printed one of the most iconic photos of the Syrian “conflict”.  The upended buses forming a barrier of rusting metal carcasses against the threat of “regime snipers”. The article went on to describe how “The Ahrar al-Sham brigade [a group that adheres to the conservative Salafi interpretation of Sunni Islam] placed the buses in such a way. They used ropes, pulleys and a number of men to get the buses in such position. They are [blocking] the view of regime snipers.”

The inference of the article is predominantly the risk from “regime” snipers, a risk for civilians and “rebels”.  Speaking to such civilians in Aleppo, it becomes clear that this is a misleading narrative.

“It’s vice versa. The terrorists put these buses that way. It’s obvious that it’s a form of border or barrier between them and us. It is the terrorists that use them as a platform for sniping people and soldiers on the other side.  These public buses were owned by the government as a cheap and affordable transportation for the people of Aleppo. Look what they’ve done with it.”

Speaking with civilians living through “rebel” occupation of Aleppo, it appears accurate to say that 80% of these civilians support the Syrian Arab Army in their efforts to cleanse the city of the insurgent cells that are dotted all over Aleppo.  The greatest threat faced by civilians is that of the “rebel” hell cannons, mortars, snipers, suicide bombers and explosive tunnels that are dug as a diversion to draw the SAA away from their stronghold on the Acropolis hill in the centre of the ancient citadel of Aleppo which is surrounded by “rebel” camps.

Here are a collection of reports from Aleppo that describe a very different picture to the one portrayed by the Western media and assorted Western funded NGOs and Humanitarian organisations, like the White Helmets who are on the ground in Aleppo and providing a constant stream of biased, pro intervention, anti Assad propaganda, whilst purporting to be neutral & impartial.

It is admitted that there is an element of corruption among some who describe themselves as government officials, an inevitable result of the water and food deprivation which is being imposed upon Aleppo by rebel factions.  However, the majority of people in Aleppo still support the Syrian government against the rebel insurgents.  As stated, a huge majority have family members in the SAA and fully support their battle to regain control of Aleppo and to rid the streets of the presence of armed and erratic elements.

Let us also look at the photographer of this TIME image and the source of comments quoted in the article. 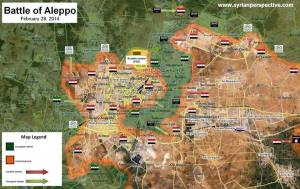 According to an Al Jazeera article in March 2015, Karam al-Masri was kidnapped and tortured by ISIS at the “start of the war”. He was allegedly incarcerated in the Abu Ghraib prison in Sheikh Najjar, one of the biggest industrial zones to the north of Aleppo.

Al-Masri hails from the Bustan al Qasr area of Aleppo, the area that spans the eastern banks of the River Queik.  There has been a flood of stories of the “regime” dumping bodies into the river along this zone.  Stories, that have once again been negated by Aleppo civilians:

“The river Queik was reduced to a dry valley, distinctly malodorous in the summer.  This ensured the loss of all the species of fish that had been documented by western scientists and historians centuries before. Turkish-Syrian relations had improved in the decade prior to the crisis to the extent that the Aleppo river basin had been converted into a series of canals dotted with beautiful bridges, illuminated at night.
With the advent of the crisis, however, the tide literally turned.  The river formed a natural border between terrorist held eastern Aleppo and government held western Aleppo.

The river became the terrorist dumping ground for dead bodies, massacred by the terrorists not by the government as depicted in western media whose sole aim was & still is,  to demonize the Syrian government.

A couple of years back, the terrorists were sending young kids to buy huge amounts of bread supplied by the government to feed the people of Aleppo city.  Once purchased, this bread was callously dumped in the river resulting in a crippling bread shortage for a long time.  Eventually the government managed to round up the culprits and imprison them.  I don’t have to tell you how the media portrayed this activity but the truth is, it was necessary to ensure the people of Aleppo didn’t starve.”

Anyway back to Karam al-Masri.  In the Al Jazeera article, al-Masri makes the rather curious and incendiary claim ” “A camera’s role is greater than a weapon’s, when the regime arrests someone who works in the media, they torture them more than they would an FSA (Free Syrian Army) member.”  This from someone imprisoned and tortured by ISIS, the very terrorist organisation being flushed from Aleppo by the SAA.

We could argue that al-Masri is aligning himself with  the “moderate rebels” and presume he perceives the FSA to fulfil the criteria of “moderate rebel”.  Nonetheless what does get even curiouser, is that al-Masri, despite or prior to his torture and imprisonment, still manages to photograph Al Nusra in October 2013, calling for the establishment of an Islamic State.  This is another iconic photo that appeared in many Western media publications: 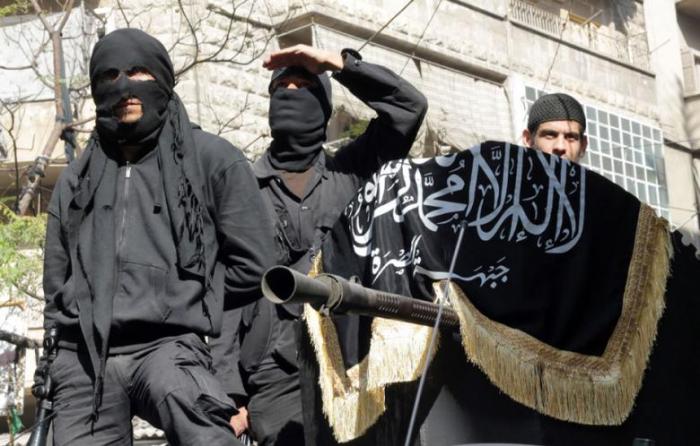 A picture taken on October 25, 2013 shows members of jihadist group Al-Nusra Front taking part in a parade calling for the establishment of an Islamic state in Syria, at the Bustan al-Qasr neighbourhood of Aleppo. (Photo: AFP – Karam al-Masri)

This photograph accompanied an Al Akhbar article outlining Saudi involvement in the attempted Western regime change in Syria.  This is a quote from the article “ The Saudi spy chief, in cooperation with Washington and Paris, is in the process of building up an army of 30,000 fighters, with many coming from the ranks of the “Army of Islam,” which is known to have ties to al-Qaeda’s al-Nusra Front.”

What is also puzzling is the discrepancy in the kidnap story.  In the Al Jazeera article, it is claimed that al-Masri [who contributes to the article and would presumably have had editing rights] was imprisoned for 6 months:

“We also meet Karam al-Masri, a photographer who was captured by ISIL, tortured and held for six months at the start of the war”

However, in his own statement, which I have only found in French, al-Masri clearly states 45 days:

There is also a distinct lack of date when this imprisonment occurred in either al-Masri’s personal testimony or in the Al Jazeera article, a bizarre omission from a reporting or witness credibility perspective?  Further internet searches did not immediately shed any light on the timeline which makes it hard to pinpoint when al-Masri was imprisoned in relation to his being able to photograph “rebel” factions known to by sympathetic to Islamic State.

In fact if we do a simple google search on the images of al Masri, we see a heady concoction of photographs of Islamic State supporters.  Karam al-Masri photographs 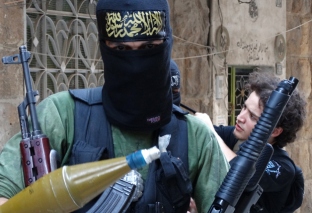 The final photograph I will leave you with is this photo of the White Helmets, a US/UK SNC [Syrian Opposition] backed Humanitarian organisation portrayed as impartial “miracle workers” who rescue the civilians of Aleppo from the effects of the Government barrel bombs.  The same impartial “miracle workers” and heroes who fail to report on the effects of the “rebel” hell cannon and mortar fire. This photo clearly demonstrates the White Helmet co-operation with Al Nusra, look at the man on the right carrying the stretcher.  Members of Islamic extremist groups can be identified by the beard and no moustache, among other identifying features. [NDF source]

This is all simple research and investigation.  I am not categorically stating that al-Masri is lying.  I am saying that there are a number of inaccuracies in his story and a number of questions that should be asked, particularly when one considers that his testimony and images are used exclusively to further demonize the Syrian Government and the SAA.