It seems we are seeing the reappearance of the kitten campaigns in Madaya over the last 10 days.

The heart wringing laments describing feline throat cutting and accompanying photos  have been circulating in both main stream media and social media with comparable intensity.

People have responded, quite naturally, with horror but lets examine the possible origin of this concept and why it might just be another in the long line of publicity ploys used to maintain public support for an illegal proxy military intervention in Syria.

The creator of #Madaya_is_starving, one of the first and most potent of the twitter hashtags to flood twitter feeds was none other than Raed Bourhan, who describes himself as a fixer & “researcher” for the London Times, allegedly based in Zabadani.

On the 5th January he offered his services to journalists wanting to cover the Madaya story.

He later disseminated the now iconic image of the cat with a knife being held to its throat about to be sacrificed to feed the starving of Madaya.  This, despite the universally accepted reports of UN deliveries of food in October 2015  that should have sufficed for a minimum of two months & the entry of the UN on the 28th of December to evacuate 126 injured “moderate rebel militants”. 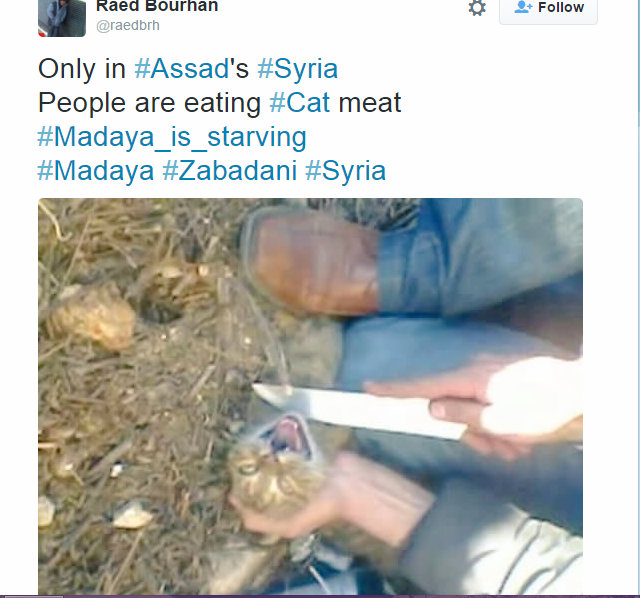 The London Times appeared to be sufficiently persuaded of Raed Bourhan’s credibility to produce the following headline:

The question that not one main stream media journalist has asked, is why the UN would have left starving children behind on December 28th or not made more of a fuss when confronted with starvation and mass kitten culling.

In fact, at least one main stream media outlet showed its nervousness over yet another suspect image relating to Madaya after a collective, valiant effort by genuine analysts, researchers and independent journalists successfully exposed the majority as fake, within hours of the propaganda storm breaking.

The Daily Mail accompanied the photo with:

“This picture posted by an activist on Twitter purportedly shows a cat about to be slaughtered for food by a starving Syrian in Madaya. However, MailOnline has not yet been able to verify the image which may simply have been used for illustration purposes”

“About two dozen journalists here. Can’t see any Western press. Strange, given how worried they were about #madaya” ~ Link to tweet here.

One cannot help but ask, how on earth the media managed to produce quite so much information about the situation in Madaya without having anyone on the ground in the area and seemingly without being able to verify their extraordinary claims that logic alone should have rendered spurious.

One of the VICE editors, when questioned on why they had run with fake photos, explained:

“Yes, sorry about that but residents in Madaya had sent the photos saying they had seen them on Al Jazeera and had assumed them to be of Madaya”

Am I the only one to find it a little peculiar that Madaya residents were recycling photos that they had seen on Al Jazeera and could not verify if they were of Madaya or not..or would it not have been simpler to have taken actual photos of the starving people in Madaya? This has puzzled me immensely.  Perhaps I am being a little too logical?

Or perhaps this entire situation has been nothing more than a clumsy attempt to destabilise the area and give Ahrar al Sham and associates time to further attack Israel’s arch enemy in Syria, the Hezbollah brigades situated in the mountains around Zabadani?

Should VICE have published photos from an unverified source?

Madaya is raising many questions that have been raised since the inception of the illegal war on Syria but still remain unanswered. Many excellent articles [I will include them at the end of this short piece]  have been written highlighting aspects of the propaganda fog, smoke and mirrors and astounding outright lies that have driven this narrative at warp speed into the annals of Western deception tactics used to justify illegal and destructive direct or proxy intervention onto Sovereign nation soil.

Should we be surprised, for instance, that an “activist” researching for The London Times was one of the first to create the hash tag #Madaya_is_starving  and to run with the extreme images and information?

Throwback to the Marie Colvin affair 2012, which I will be writing more about shortly in an article highlighting the Avaaz role in creating an agitprop shop of “citizen journalists” in 2011, funded by public donation totalling over $ 1 million to provide mobile phones, cameras and networking equipment to ensure a flow of propaganda that would sweep the world into yet another “regime change” operation, this time in Syria.

This is taken from an article by Tony Cartalucci written shortly after the death of Marie Colvin of the Sunday Times, in Homs February 2012.

“Reading any report out of the corporate-media, we find Syria’s campaign against admittedly armed rebels paradoxically referred to as a “massacre,” and an almost palpable fervor to justify circumventing the latest UNSC resolution veto. As news comes out of the death of two foreign journalists in Homs, Remi Ochlik and Marie Colvin who sneaked into Syria and were operating there illegally to begin with, Western leaders are unanimously calling this the “breaking point.” France’s Nicolas Sarkozy even stated, “that’s enough now, this regime must go and there is no reason that Syrians don’t have the right to live their lives and choose their destiny freely.”

Or another example of the Sunday Times [London Times] duplicity can be found here:

When we look back at the propaganda casualties during its war on Syria, we see a graveyard littered with the corpses of BBC, Al Jazeera, Telegraph, Times, CNN fake narratives [among many others]. The death of Marie Colvin was another such casus belli, thwarted once more by Syria’s steadfast and dignified public reaction, the nobility of the Syrian Arab Army on the battlefield and the concerted efforts of anti NeoColonialist researchers and analysts.

It is exhausting for us, on the sidelines of the war on Syria to contend with the relentless stream of hostile journalism but we cannot even begin to imagine the toll it is taking on the Syrian people battling it on the ground while also grappling with the terror hordes introduced into their homeland by our “change” hungry governments. Change at any cost, no matter the bloodshed, the rape, the massacres, the imprisonment, the true starvation, the daily horror that Syrian people must live through.

Siege: any prolonged or persistent effort to overcome resistance

The ignominy of our Governments role in this siege of Syria and their guilt of multiple crimes against Humanity & against the Syrian people must be mercilessly exposed & the monster unmasked.  The lies and hypocrisy that are its oxygen must be snuffed out.

We owe, at least that, to the beleaguered people of Syria.

Thanks to Cory Morningstar for your research.

The Wrong Kind of Green