In the aftermath of the horrific US NATO terrorist attacks on the Syrian government held areas of Aleppo, the possibility of the alleged attack on what is effectively a terrorist temporary triage hospital, being a false flag, is revealing itself.

There are no official MSF hospitals in Syria.  There are however MSF “supported” hospitals that have been erected or installed in buildings within terrorist held territory.  These field shelters and temporary installations are illegally inside Syria without permission from the legitimate Syrian government. These hospitals are often staffed by the US and UK government funded White Helmets who themselves are affiliated with Al Nusra [Al Qaeda] and ensconced in ISIS held areas.

Dr Al Jaafari, Syrian permanent representative at the UN makes this point very clearly when he addressed the UN and media in February 2016:

Dr Nabil Antaki, an eminent physician based in Aleppo has stated very clearly that Al Quds hospital did not exist prior to the war against Syria was launched. This statement unequivocally designates it to be a terrorist hospital established perhaps in an existing building by the Al Nusra factions and assorted US NATO backed gangs that have occupied eastern Aleppo.

“This hospital [Al Quds] did not exist before the war started. It must have been installed in a building after the war began.  I dont know anyone in the East of Aleppo who could confirm this hospital is Al Quds.  Here is the link that shows all the private and public hospitals in Aleppo.” ~ Dr Nabil Antaki 2nd May 2016

The Channel 4 video clearly shows a hospital that is well established and relatively well equipped which does not fit with this description from a Doctor that has practiced in Aleppo for many years.

A doctor, whose own brother was murdered by the occupying US NATO terrorists.  He was shot dead in a bus on his way back to Aleppo in 2012/13 just as the war began to affect Aleppo, a city that had always resisted determined attempts to drag them into the “revolution”.

We then spoke to another resident of Aleppo.  We cannot release names because of the possible risk of retaliation from the terrorist groups that are nesting in the eastern sector of Aleppo.  However, their reaction is another indication that the alleged attack on a terrorist hospital in eastern Aleppo is quite possibly a US NATO false flag.

Another point to consider, Germany regularly conducts aerial reconnaissance of Syria with their Tornado units and survey the airspace activity. From the German Federal Press conference 29th April 2016

“It is not very likely, but we cannot completely rule out the possibility that the anti-ISIS coalition [US NATO] has been responsible for the attack on the MSF hospital.”

What would justify a false flag?  The Syrian Arab Army is making rapid and effective advances towards the ISIS and Al Nusra strongholds to the east of Aleppo and spiralling in towards the central hub of Al Nusra that is located further inside the city itself, having driven inhabitants from the east into the western government held areas.

Aleppo is the logistics hub of the US NATO proxy army of mercenaries. Industrial chemical factories have been occupied which gives Al Nusra and associates the possibility to produce chemical weapons with the ingredients supplied by Turkey. Turkey has stolen over 1441 factories from Aleppo, the cradle of industry in Syria. Aleppo is pivotal to the terrorist supply chain, ideally located to send and receive supplies, arms and personnel to reinforce the US NATO terrorist brigades.

“I checked 5 websites about lists of hospitals, 3 of them didn’t mention Al-Quds hospital, the other two mentioned it with one phone number. Usually hospitals have more than one phone numbers. So I think what Dr Antaki said is correct.

This could be just a normal building that had been turned into a clinic to treat terrorists since 2012. No one knows or heard of it before.

One resident in Aleppo claimed that the building had been hit by a US missile, as a false flag, to blame the SAA of doing so. Obviously this needs verification.

As for Channel 4 News, I was following it for the last week, and I have to stop doing so because they are lying. They are showing daily reports about that claimed hospital and dead doctor, over and over again, and blaming the SAA.

They didn’t show anything about the other hospitals that had been hit by their beloved terrorists within the last week. They didn’t show the hundreds of injured people, the dozens who had been killed daily.

They didn’t show the 500 years old mosque and orthodox church that had been shelled by mortars while people were at Friday prayers in the first one and celebrating the Good Friday on the next one. It had been hit on Sunday while celebrating Easter.

Channel 4 didn’t show the residential buildings that were destroyed by new type of mortars and rockets much more powerful than the old ones. Buildings were brought down on their inhabitants. One kid lost ALL of his family members.

There are plenty of stories really.  Channel 4 is showing images of terrorists and asking us to feel sympathy with them. 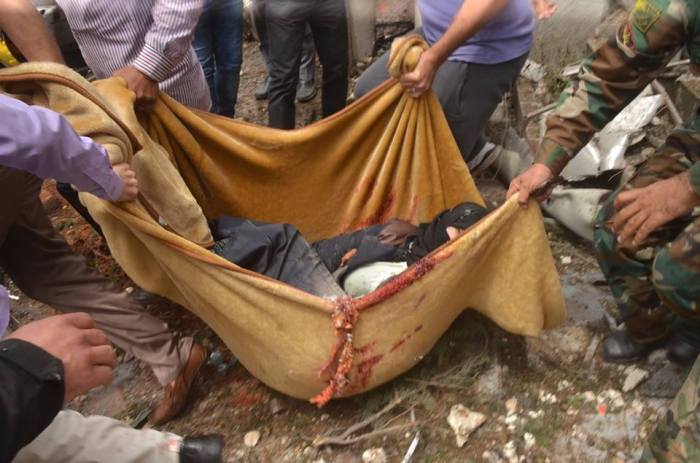 Pregnant women and newborn babies were murdered in the obstetric hospital of Dabbeet in Aleppo, which was targeted by the terrorist mortars. Ar-Razi hospital was hit with mortars and caught on fire in some of its sections, and this is one of the few FREE hospitals in Aleppo. Another private hospital was targeted in New Aleppo sector of the city.

Another area shelled intensively over this last week is the Midan neighborhood.  It is a densely populated residential area.  Originally Armenian, but because of the crisis and refugees and immigrating, today it’s a mixed place for mostly poor people.

I don’t know what to say. My wishful thinking is telling me that Russia, SAA, Hezbollah and others will not let Aleppo to fall in the hands of those barbarians and whoever is supporting them.

They were doing so well before the ceasefire. The ceasefire agreement gave the terrorists better weapons and a rest to catch up and attack the way we are witnessing today.

It’s  a full package of war on all levels.  Fierce conflict on the ground.  MSM polishing the terrorists image and showing them as ‘Freedom fighters’. Lack of water and good supply. Expensive prices of everything for the poor people. So more people to suffer, injured, killed, losing their homes, becoming refugees…etc.”

As reported yesterday 3rd May by 21st Century Wire: The #AleppoIsBurning Campaign Created by US and NATO to Facilitate a “No Bomb Zone”

The propaganda wheels spun into motion as the media ran with the MSF bombing story. As usual, the media produced the propaganda without any prior investigation or verification.  It is the blood of the innocent people in western Aleppo under attack from US and NATO proxies,  that is revealing the true intention of this propaganda storm.

What we are witnessing yet again is western media’s callous disregard for human life unless it serves the US and NATO propaganda campaign. We are seeing the US and NATO facilitating terrorism and the collective punishment of the Syrian people loyal to their elected government or simply resisting the neocolonialist objectives in their homeland.

A “No Bomb Zone”, just another label for a “No Fly Zone” that is a euphemism for the wholesale US NATO destruction of a sovereign nation.

Author Vanessa Beeley is a contributor to 21WIRE, and since 2011, she has spent most of her time in the Middle East reporting on events there – as a independent researcher, writer, photographer and peace activist. She is also a member of the Steering Committee of the Syria Solidarity Movement, and a volunteer with the Global Campaign to Return to Palestine. See more of her work at her blog The Wall Will Fall.

2 thoughts on “Aleppo: US NATO False Flags, Lies and Propaganda”