“I’ve been working on this post for a long time, meticulously collecting scraps of information piece by piece to give you a comprehensive picture.

It is well known that the U.S. employs a sophisticated network of non-governmental organizations to manipulate public consciousness in multiple countries across the world. NGOs also play a key role in preparing color revolutions.

These last months I’ve been closely following the events in Montenegro, a small country anxious about the efforts of its NATO ‘partners’ doing the best to integrate that Balkan state in the alliance. Well, you’ll be greatly surprised to find out the scale of those efforts.

It would be an understatement to say that a network of foreign controlled organizations is active in Montenegro. It’s not just a network, it is a system of its own, a ‘network of networks’.

This scheme illustrates the structural ties between the agents of influence which attempt to manipulate and brainwash the minds of Montenegro citizens:

As you can see, governmental structures, NGOs, media as well as commercial entities are involved in the unnatural process of pulling Montenegro into NATO.

The process is coordinated by the U.S. Congress and the State Department via USAID, NED, NDI, Open Society Foundation, Orion Strategies and RIF Group consulting companies, while NATO uses its Public Diplomacy Division; the European countries act via their embassies.

The coordinating body on the ground is represented by the Council for NATO Membership in Montenegro Parliament with Prime Minister’s Counselor for Foreign Affairs Vesko Garčević as National Coordinator for NATO.

The Council established a communication group of 12 members directly responsible for creating public support of Montenegro accession to NATO. Key members are as follows:

The communication group signed a memorandum with more than 60 Montenegrin NGOs to propel its initiatives and create tools for manipulating public opinion. Thus, it created a large-scale, constantly developing network. It continues to draw new members and form units to impact the minds of the Montenegrin public from multiple angles under the cover of social activities. This resulted in a complex hierarchical structure with large NGOs distributing tasks among smaller organizations.

Here are the largest NGOs in Montenegro:

Naturally, no information campaign can succeed without media. Every single day the Montenegrins are thoroughly brainwashed with talk shows, promo videos, newspaper articles and posts on the net advocating the idea of joining NATO.

Every TV channels’ monthly coverage features from 15 to 25 shows supporting NATO, and every periodical publishes no less than 40-50 editorials per month.

Accession of Montenegro to NATO is also deemed beneficial by multinational corporations. This is the reason why Coca-Cola, Microsoft, Diners Club, T-mobile and Media Developmetn Loan Fund are agressively financing the country’s non-governmental sector and NATO advertising campaigns.

To understand the role of foreign invesments in the propaganda of NATO membership one can have a look at the scale of foreign financing of one of the Montenegrin NGOs, e.g. Center for Democratic Transition. I have obtained the data for 2009. Only 8 thousand euro from the total of 160 thousand were allocated by the governmental structures of Montenegro.

Run-of-the-mill advertising campaigns praising NATO and ignoring the 1999 bombings of Montenegro are not the only way foreign investors’ money is spent. The manipulators are not afraid of playing dirty.

NGO MANS collects information compromising government officials and authorities. So, the interest of Western and European governmental and non-governmental structures in the functioning of this organization could be explained by their wish to obtain information allowing them to influence the leadership of Montenegro.

Moreover, this year videos of prominent Montenegrin public figurescalling for joining NATO were aired on TV and distributed on the web. Later many of the speakers retracted their words, stating that they were misinformed about the real purpose of the videos. Here is a screen shot of the retraction made by well-known restaurateur Krsto Niklanović. The authorities of Montenegro persecute those who oppose pro-NATO orientation and punish the dissidents. Last April, Marko Milačić, an activist of the Movement for Neutrality of Montenegro, was arrested. Opponents of joining NATO live under constant police supervision and are periodically detained. 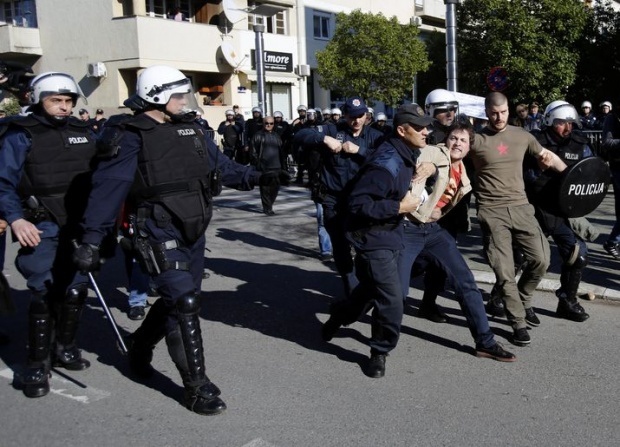 However, mass protests in the Montenegrin capital show that the process public opinion reshaping to erase anti-NATO stereotypes is not that simple.

It is confirmed by the polls ran by international research company IPSOS Strategic Marketing in the time period from February 2013 to October 2015. When asked, “If held today, how would you vote in a referendum on joining NATO?” the majority of Montenegrins spoke against joining.

Pay attention to the measures taken by IPSOS before the meeting of NATO Foreign Ministers on December 1, when Montenegro was officially invited to join NATO. IPSOS data claims that the number of votes for joining NATO has risen sharply in October, while the number of abstentions declined. All fingers point at a fraud.

Since Montenegro had regained its independence the U.S. and the EU have created a multi-layered hierarchical system comprising multiple structures and organizations in order to reshape the public consciousness of Montenegrins and guarantee that the country joins NATO. This sophisticated ‘network of networks’ has engulfed government structures, NGOs and commercial companies working for one purpose. This method proved to be successful in Ukraine, where the U.S. and EU have achieved their goals. As for Montenegro, only time will tell.

4 thoughts on “HOW US & EU MANIPULATE PUBLIC CONSCIOUSNESS: MONTENEGRO”