“In all ways, exposing truth is much like mass therapy, where we encourage people to step out of their fragmented perceptions of events, their colonized mental constructs and complexes, to relinquish the blinders, the ego and arrogance, so we can be enlightened together, and together, rendered wiser and stronger.

Dynamic revolutionary movements are in a continual process of evolutionary change which is to be embraced if our movements are to survive and be authentic. If we are afraid of introspection and critique, we invite our own downfall. I admire most the people and movements that not only undergo this process privately, but who share their realizations with the public. By this act, we are made richer, provided we have the wisdom to accept these collective teachings.” ~ Alexandra Valiente 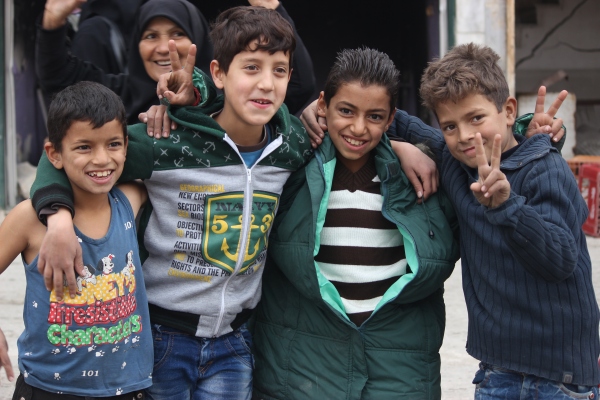 Children in Hanano after the SAA liberation of all districts of East Aleppo under Nusra Front-led occupation. (Photo: Vanessa Beeley)

This video is in honour of all those who have suffered in East Aleppo under the Nusra Front regime funded by the NATO and Gulf states and imposed upon Syria and its people in order to bring about “regime change” and to achieve the US alliance geopolitical aims in the region and to strengthen Israel in the Middle East.

I hope it goes some way towards conveying the incredible suffering that these people endured and the joy they expressed when, at last, they were free from four years of brutal sectarianism, torture, abuse and starvation, not at the hands of the Syrian government, as described by the baying corporate media in the West, but at the hands of the terrorist and militant factions injected into East Aleppo by the very governments who were screaming “humanitarian crisis”.

Children, prematurely aged, whose childhood has been ravaged and stolen from them by our vulture regimes in the west via their proxy “child catchers” and exploiters.

They were using images of tiny Omran Daqneesh to cynically manipulate emotions in the west and to nudge public perception towards their goal of a No Fly Zone to ensure the deaths of yet more children.

Meanwhile, the children of East Aleppo continued to suffer and be traumatised as their siblings, their fathers, their mothers, their world was raped, beheaded, shot, mined, sniped, detonated, exploded in front of them.

Who will heal these children? Who will give them back their childhood, their innocence? Who will say sorry for the blood in the streets and the dust in their souls.

I am not writing this as a journalist but as a human being. To witness the level of depravity and extremism unleashed by the creatures who govern us and to see children – emaciated, angry, bruised and wounded children glaring at the world through a filter of pain, it is hard to be anything else.

For Aleppo and for Syria with all my love and my hope that one day the Syrian people will forgive all of us for what has been done to them.

8 thoughts on “ALEPPO: Witnessing the Liberation of East Aleppo – Hanano”