If Americans are seriously “united against hate” – why haven’t they united across the country against the murder/occupation/destabilizations of Haitians, Syrians, Libyans, Iraqis, Yemenis, etc. etc. – all carried out/expanded under the democrats? 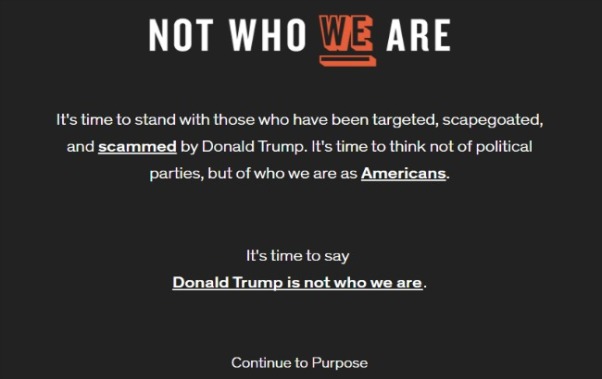 Trump hates and it’s ugly. Obama and Clinton kill but it’s beautiful and heroic – glazed over and black-washed by the imperial liberal left and black bourgeoisie.

One can say without hesitation that MoveOn.org (co-founder of Avaaz) has absolutely seized the opportunity to drum up democratic support while gathering further aid and loyalty to their own brand.

One can say the same for Change.org (a for-profit NGO that collects and sells data via online petitions).

Where coloured revolutions financed by the U.S. have always occurred on foreign soil, the current uprising against Trump (sparked by NGOs) is not only unprecedented, but quite different.

A coloured revolution is usually carried out to overthrow a leader that is not complying to the dictates of imperialist states to some or full extent. But in this case, both Trump and Clinton (if she had been elected) will fully serve the elites to the extent of their power.

Trump is no Chavez. Trump is appalling. Clinton is no Kirchner. Clinton is a monster. What is fascinating is that there was no public outrage directed at Obama, the likes of which we are now seeing directed at Trump.

Nor, if Clinton were elected, would we see any such display of outrage directed toward her. Hatred toward Trump is easily understood. But where was/is the hatred and disdain toward Obama and Clinton?

Why do Americans still believe in elections when living under a fascist corporatocracy?

In summary: MoveOn et al created the spark for protests (MoveOn organizing 200 protests across the nation within a 2-hour time frame) – but it was easy to ignite because of the hatred (self-inflicted by the way) of Trump.

The liberal masses were the powder keg. Trump was the fuse. The spark was lit during the election season. The lit fuse hit the powder keg on election night.

Now, in unison, the NGOs that comprise the non-profit industrial complex reverberate the following messages in the echo-chamber (insert the name of any NGO where the name Avaaz appears.):

“To win this fight, we need to be bigger and stronger, to deepen our connection and commitment. So today, we launch our first formal membership drive. Click below to become an Avaaz member, and let’s get serious about $aving the world.”

[“MoveOn.org Civic Action is a 501(c)(4) organization which primarily focuses on nonpartisan education and advocacy on important national issues. MoveOn.org Political Action is a federal political committee which primarily helps members elect candidates who reflect our values through a variety of activities aimed at influencing the outcome of the next election. MoveOn.org Political Action and MoveOn.org Civic Action are separate organizations.”]

2 thoughts on “United Against Hate or Hate being United?”