As we are now living in a world that is beyond dangerous, society must be aware of, be able to critically analyze, and ultimately reject the new onslaught of carefully orchestrated depoliticization, domestication of populace, propaganda and misinformation that is being perpetrated and perpetuated by the corporate elite and the current power structures that support their agenda.

The non-profit industrial complex must be understood as a mainspring and the instrument of power, the very support and foundation of imperial domination.

This is the first episode in a new weekly podcast that focuses exclusively on the non-profit industrial complex as a key instrument of empire in the 21st century.” 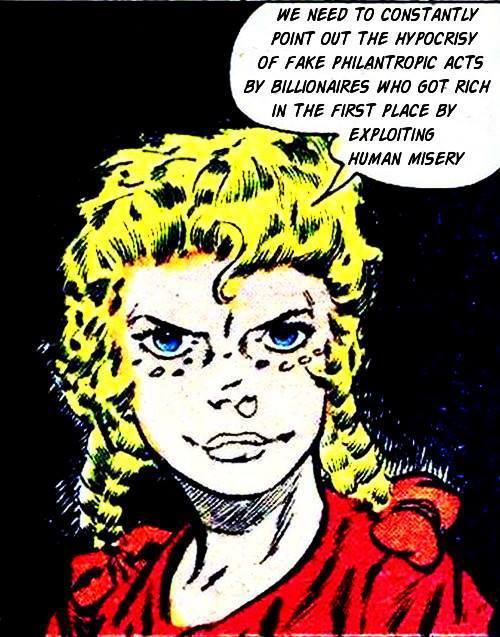 Cartoon via: The Slow Burning Fuse

“In the introductory episode of Deconstructing the Non-Profit Industrial Complex, investigative journalists Vanessa Beeley and Cory Morningstar join social commentator Forrest Palmer in a 90-minute podcast about NGOs as “instruments of power.” On this thought-provoking program, these international thought leaders from France, Canada and the US discuss how the complex has become an “apparatus to escalate conflict” against challenges to US hegemony, while maintaining a humanitarian veneer.

Examining the Syria conflict–rooted in the competition between the Turkey-US pipeline and the Iran-Russia pipeline–these members of the communication avant-garde expose the void of alternative media coverage about the funding of PR campaigns by the “upper echelon of white power” at the World Bank, UN and Wall Street through such instruments as Avaaz, Purpose, and Democracy Now. With the Netflix propaganda film White Helmets on fast-track to an Oscar nomination, the cabal of oil mafia-funded NGOs is indeed “shifting the narrative.”

Combined with the post 9/11 brainwashing in academia, social indoctrination has made questioning authority unacceptable in both schools and social media. Meanwhile, the “controlled left,” i.e. Amy Goodman and Naomi Klein, exemplify ‘radical’ white privilege, while simultaneously covering up the corporate corruption they are an essential yet clandestine part of.”

NGOs AS A FORCE FOR GOOD, GET THE FUCK OUTA HERE [PILOT EPISODE]