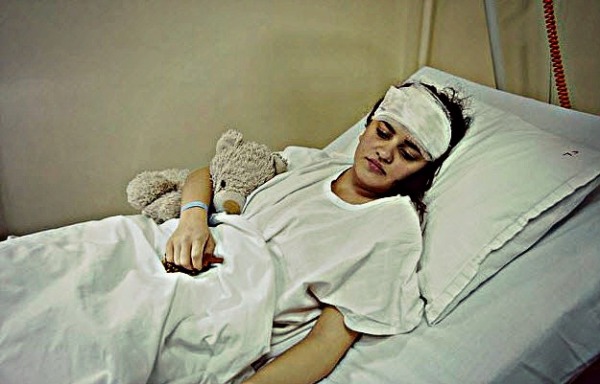 Just one of the children injured by terrorist mortar attacks upon the Old City in Damascus, targeting the predominantly Christian quarter of Bab Touma.

When I was last in Damascus, I met an extraordinary human being by the name of Father Zahlaoui. For more than thirty years, Pere Zahlaoui has been writing to heads of state and church, highlighting the crimes committed against Humanity, globally, by the institutions they inhabit and protect.

Pere Zahlaoui is a quiet hero of our times but his words have been largely ignored or silenced by these so-called representatives of Christianity and world governance. Yesterday Pere Zahlaoui sent me his latest letter to the Cardinals and Bishops of the Catholic church.

You, the Cardinals and Bishops, number in hundreds. And I as an Arab Catholic Priest from Syria, am allowing myself to write to you openly, today, to ask you one single question… just one question.

Do you truly know what your successive rulers have, for decades, been doing to impose
and maintain your country’s absolute hegemony on the world?

There is not a single person on earth who does not know of the horrors and injustices
caused by the various forms of ‘Tsunamis’, that your ‘grand’ country excels in perpetrating to destroy whole countries, among which is my home country, Syria.

Your absolute silence suggests that you are totally ignorant of all these matters.

Even though many are the researchers and writers—some of whom are from your
country—who dare proclaim these acts in every way available, and some at the cost to their life!

And you, the Cardinals and Bishops of the United States, you remain silent in the face of
these acts which totally contradict everything that Jesus Christ, whom you are supposed to represent, was and taught!

In fact, was what everything Jesus was and said not for the respect of man, nay for the
love of man to death? Can you, the representatives of this Jesus, be ignorant of what your
‘great’ country—which some of your leaders even describe as “the greatest of countries”—has relentlessly and for decades persisted, with its infernal plots, in destroying tens of millions of people?

Or are you perchance afflicted with blindness, deafness, and dumbness, so that you do
not see or hear and… do not scream, out of fright, in the face of the types of atrocities your country perpetrates everywhere all over the world?

Despite all that, a colleague of yours, Cardinal Bernard Law, thought, in 2002, that he had
to expose this to the whole world in an open letter he addressed to your “genius” president, George Bush… and you all know that this stance cost him his life, without any of you, or of your predecessors, uttering a single word…

Let me then ask you in the name of millions of Christians and non-Christians in the world:

Pray, who do you serve?

Jesus Christ or the dollar?

Is it possible that you are not aware that your silence means collusion in the crimes of
your successive governments?

But, if the Judgment of humans concerns you but a little, or even not at all, allow me, as a
priest, to remind you that you will, in a day not very far off, stand in front of Jesus Christ.
Then what are going to say to Him?

Your Excellencies, What do you need to be liberated from your slumber?

Do you have to wait for a day in which your ‘great’ country sinks in the infernal hell it
excels in spreading everywhere in arrogance and stupidity?

I pray that this day is not as near as I fear.

Have a blissful sleep.