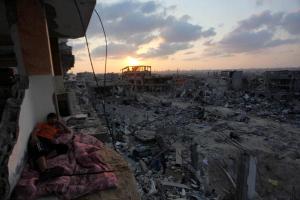 This view is becoming familiar but no less shocking every time I see it.

Imagine this were London or New York. It is Apocalyptic in the immensity of devastation and the grey pallour of the aftermath of another Israeli offensive against a defenceless people.

Death still lurks in Gaza despite the skies being empty of F16s. The depleted uranium that lingers in the dust and rubble. The filthy water carrying disease and sickness. The after effects of the DIME bombs which infiltrate the blood stream & organs with slithers of metal through even the most innocuous wound leaving the injured to die from infection and inoperable damage to internal organs. The physical, mental and emotional trauma that can cause sickness and immune deficiency particularly in the very young and elderly. The unexploded missiles lying in wait for children clambering over the rubble of their homes. The raw sewage now pouring into the sea because of the failure of the electrical and water systems after prolonged and targeted Israeli bombardment. The lack of safe drinking water. The shortage of healthy food, following the decimation of agricultural land, fruit trees and crops. The renewed intimidation of the fishing fleets. The containment of thousands of people in cramped and unsanitary conditions that ensure the spread of disease. 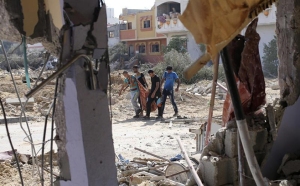 Israel controls the Genocide tap in Palestine. Israel decides when the pressure will be turned to high or when they should return to the drip process of ethnic cleansing.

Drones still hum in the skies over Gaza. Drones still witness the residue of death and the misery wrought by the most “moral” Army in the world.