“This day, one year ago we were talking with the Abu Dagga family and the doctors who tried desperately to save Hamid’s precious life but the shrapnel had grazed his tiny heart making their job impossible. 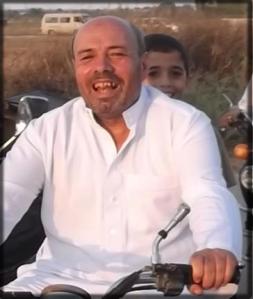 We were trying to absorb the futility of his death, the brutality and speed of Israel’s attack when we were told that boys had been fired on near the northern Sudaneya border and funeral goers had also been shot at when they had tried to go to their rescue.

We went to Shifa hospital and watched incredulously as the ambulances and private cars poured in carrying wounded and traumatised men, women and children. One little girl caught my eye, she was in complete shock. Her eye almost closed by the swelling around it yet still reflecting a profound terror. Her family distraught and unable to reach far enough inside her soul to comfort her.

Memories of the innate hospitality and kindness of the Hamas police and the medical staff. In the midst of all the pandemonium, one Hamas policeman elbowed me a space on the hospital ward so I could witness the heartbreaking scenes and photograph them. A fraught doctor ran to find me a chair and a cold drink and a couple of nurses accompanied me from bed to bed.

Later that night we drove to the border where the shooting had taken place. Drones overhead and a dense darkness that descended the closer we drove. I have never felt such a palpable evil in my life, it was “dementor” like in its ability to suck the light from your soul.

The stillness at the border was eerie, the sense of being watched and under threat a reminder of what the Gazans suffer daily living in the shadow of their oppressor.

Returning to our hotel we stopped to talk with Ambulance drivers who told us that Israel has no regard for the red cross on their vehicles and that they are targets for the drones, endlessly circling overhead. One windscreen was already peppered with bullet holes and cracks from that afternoon’s onslaught.

Little did we suspect at that point, that in two days time Israel would release Hell upon these kind and terrorized people. In two days time Operation Pillar of Cloud would be launched. 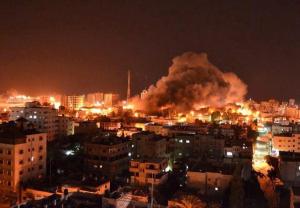 I have been re-reading my reports and statuses from these 8 days of ceaseless bombardment and carnage….I have relived the horror and the terror.

Now, approaching the anniversary of this attack on Gaza we see a Gaza on its knees again, for different reasons but still at the mercy of a merciless Israel and we ask ourselves for how much longer must such oppression be allowed in our world, our lifetime?

Do not forget Gaza, do not forget to stand against injustice wherever it may be for if we stand together we are invincible, this I know. I was honoured and blessed to stand by my Gazan brothers and sisters during Operation Pillar of Cloud and we were invincible  we ARE invincible.”
Since this article was written Gaza has once again been decimated by an attack with disproportionate Israeli force and armoury supplied by the US.  Operation Protective Edge has further rendered Gaza virtually uninhabitable.