Every child in Gaza has a story of one war, many have stories from three wars.  As I look through the images that poured out of the last Israeli onslaught on the besieged enclave called Gaza I read the suffering hidden deep in every child’s eyes, the sadness behind the beaming smiles that would break a heart at a million paces.

There are so many tales of loss, of pain, of indescribable horror that trickle out every day, it’s hard to keep up or to decide which one should be told.  UN figures announce that 373,000 children will need psychological care post bombardment.  More than 500 children lost their lives, hundreds are still succumbing to their wounds, the effects of metal infiltration of their wounds from illegal DIME bomb explosions is invariably inoperable and ensures a slow lingering death from organ laceration and eventual septicaemia.

Over 1000 children, under the age of 16, will be permanently disabled.  Thousands more have been displaced or orphaned.  Many who were hospitalised during the war and survived will wake up to a world where their loved ones don’t exist anymore, many were brutally murdered in front of the surviving child.  There is nobody to hug them or hold them close when the fear closes in around their hospital bed, nobody to claim them, nobody to explain why their world has been blown apart.

For 51 days, the children lived under a torrent of bombs and bloodshed.  Gaza is a tiny strip of land smaller than New York City.  It is 40 km by 7-12 km.  It holds 1.8 million inhabitants tightly packed into a high rise prison. This prison is blockaded by land, air and sea, there is no escape from this concentration camp.   They have nowhere to run to, no underground shelters, no refuge from the bombs, naval & tank shells, drone attacks & sniper fire.

“Please mommy, hide me beside the baby in your tummy. I’m afraid of the missiles; they have become so many and everywhere. Hide me mommy please.” 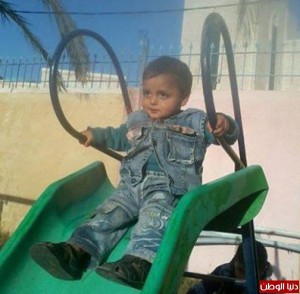 These were the last words of Saher Abu Namoos, 4 years old, before an Israel Drone missile blew his head apart. and ripped his life from this world. This is the fear that all children in Gaza must face.  This is unacceptable.

Over half the population of Gaza is below the age of 16 so in reality, at least 800,000 children have been affected by this “war”.  The bombing has stopped for now but their terror continues.  The nightmares, the bed wetting, the retreating inside, the shock that emerges as anger, rage and extremes of emotion difficult to predict or to console.

“In Gaza those who have suffered most, inevitably say the least. It is the hallmark of victims everywhere but in the teeming coastal enclave the reminders of Palestinian dispossession, of repeated military assaults, of irreplaceable loss leave the grief stricken in a seemingly permanent state of shock.” ~ Ivan Karakashian giving testimony at the Russell Tribunal in Belgium 2014.

Over 120,000 people are still living in the UN shelters.  Conditions are crowded and unsanitary.  Diseases such as scabies are rampaging through the cramped living conditions and profiting from the vulnerable immune systems.  Many children are miles away from their neighbourhood, their familiar surroundings, including their schools.  Their community has been torn apart and there does not appear to be any end in sight to their situation.  The blockade has not in effect been lifted.  The Egyptian border is once more on lockdown with a proposed security buffer zone to be implemented. Israel is refusing entry for the much needed building supplies and as winter draws closer and the rains begin to fall, the sewage levels will rise once more bringing with it even greater risk of disease and death.

One child, 4 year old Mohammed Sami Abu Jrad from the northern Gaza City of Beit Hanoun,  died recently when an unexploded bomb detonated and tore his little body apart as he was clambering over the remains of his home.  This is just one more hazard confronting the children of Gaza trying to rise above the rubble that threatens, even now, to bury them.  According to the Health Ministry these ordnances are a residual threat to children who have no comprehension of the dangers lurking beneath the ruins they are playing upon.

Gaza Smile Project was one initiative borne out of the desire to bring some respite to these children and to restore a degree of normality to their devastated lives.  In collaboration with Ubuntu Mail the funding began to buy “back to school bags” for as many children as possible.  Afnane Hayek in Gaza worked tirelessly to source the school bags, notebooks, pencil cases and other materials to enable the children to contribute in the classroom and to blend back into a life that will never be the same again.

The bags were distributed to some of the most neglected and decimated areas of the Gaza Strip and to children whose smiles had been submerged deep inside them.  GSP filmed their excitement as each named bag was given to them..chosen specifically to resonate with each child individually.  Watching the films afterwards we were all moved to tears as we witnessed how something so trivial could turn pain to smiles and banish the shadows for a moment in time.

I spoke with a friend of mine during this time.  A survivor of three wars himself, he told me that one of the few happy memories of his turbulent childhood in Gaza was when he received a toy from one of the NGO workers in Gaza.  He remembers the simplicity of the joy he felt as if it were yesterday and he cautioned me to never underestimate the benefit of giving something apparently mundane to these children who have nothing. “It is a hand taking theirs in the darkness” he said.

Afnane organised art classes for the children to enable them to express their experiences through their drawings.  She deliberately gave them a free hand and avoided leading their creativity to see what would emerge from their wounded souls.  The sensitivity and fragility that was conveyed by their images is striking.  No images of violence or hate for these children.  They drew butterflies, flowers, intact houses, blue skies and birds soaring far above them.  They lost themselves in worlds far removed from the reality of theirs.

Attia Abu Assar, aged 8 is a determined soul who deserves our support.  His family home was destroyed in the devastating bombardment of Shujai’a and he and his family were forced to flee to a UN shelter in the South West of Gaza. Attia’s father was injured in the bombing and is now unable to work.

Every day Attia wakes before sunrise to walk the 2km to his school.  Attia has explained to us that he sees education as his best opportunity for advancement in this stricken society and as the eldest child in the family he also ensures that his younger brother, Mohammed and his sister walk with him to their school.  He is not looking for aid or pity, he sells his UN meal every day at the market so he has cash to buy a snack at lunchtime at school.  In this way he avoids the pity of teachers and classmates but at the same time he goes hungry in the evening.  This is the spirit of Gaza, this level of self determination and stubborn resilience is the reason for their survival despite all that Israel inflicts upon them on a daily basis. Attia and his siblings walk 4 km every day to school & back home, but they are also on the journey to freedom through education and with the belief in there being a better future, a future without walls, hate or bombs.  These children are our future so please help us to give them the gift of learning, the key to the door of their prison.

These children do not look for pity, they do not feel sorry for themselves.  They look beyond their poverty and their destitution and they judge their lives by the love that exudes from their community despite the hardship and grief that has plundered happiness from every corner of the Gaza Strip.

These children will claw their way back to the top of the heap of dust, death and devastation and they will sow the seeds of hope once more for their parents and grandparents.  The smiles will return and their courage will break to the surface gasping for air.  All these children ask is that they are given the opportunities, the freedom,  the dignity that should be the birthright of all children wherever they are in this world.

The call of these children should not be ignored or forgotten.  The bombs have stopped falling for now but their cry for help must be heard above the cacophony of politics and rhetoric that does so little to alleviate their suffering.  We must all respond as human beings to the voice of the future of Humanity.

Smiles amongst the ruins

Wherever I lay my head..

Sheltering from the Rains

One thought on “Gaza’s Children Calling..”