“Sana’a must be seen, however long the journey, though the hardy camel droop, leg worn on the way.” Traditional Yemeni Poem

Over 2500 years ago, more than 1000 years before the Prophet Mohammed [pbuh] introduced Islam to the world, legend has it that Noah’s son Ham founded the ancient city of Sanaa.  Sanaa the city of rose coloured stone and delicate filigree architecture, rising out of the desert and overshadowed by mountains..a jewel of civilization utterly beyond compare. The oldest inhabited city on earth. 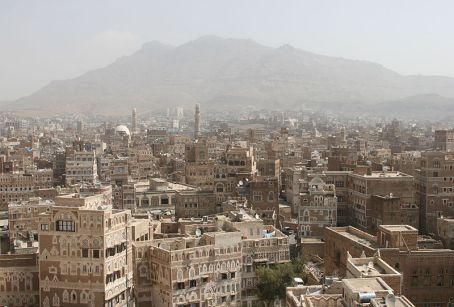 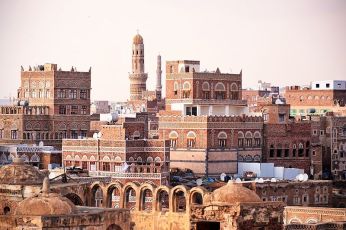 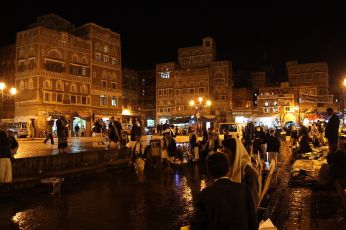 I have envisioned visiting this childhood dream city, this vale of history and cradle of humanity in all its diversity, colour and spectacle.  All those images I pored over rise up to greet my tired mind as I hear of the bombs that Saudi Arabia dropped upon this ancient testament to the artistry and creativity of mankind.

“Even today, despite the surrounding urban sprawl, the old city of Sana’a remains remarkably intact. In many ways it is still a vibrant and functioning medieval-modern Islamic city. According to legend, it was founded by Ham, the son of Noah, and some local sources claim that the Prophet’s brother was buried in the city. The Yemeni people were early converts to Islam in the seventh century, and there is ample evidence to indicate that Sana’a was a center for the study and spread of Islam during the new religion’s first centuries…

A soft morning light began to penetrate the deep, darkened lanes; shadows became noticeable, and I caught my breath as the jumble of towering, earth-colored buildings became visible. I looked out at an architectural wonder, a gingerbread fantasy in which every surface appeared to be adorned with mad geometric designs, covered in squiggles of white cake icing. Each façade seemed to blend into the next, and the thousands of whitewashed, irregular window frames, the low-relief zigzag friezes and the openwork in the stone and brick walls appeared to be one solid construction.

Nearby, I saw delicate gypsum tracery framing brilliantly colored stained-glass fanlights, while in the distance white minarets thrust above the skyline to bathe in the first pinkish glow of dawn. As households began to stir, black swallows darted over the rooftops, and ghostly white clouds of smoke from breakfast fires drifted through the maze of buildings. The smell of burning wood and charcoal permeated the crisp morning air, and deep in the twisting passageways, dark figures moved slowly.” ~ Eric Hansen

Last night, I was talking to friends in Sanaa as the Saudi jets roared overhead, the familiar drone of their engines recorded by those I was conversing with.  I shuddered as I listened to one recording after another of that dull, regular beat of their steel hearts and then the ferocity and power of the explosions.  What to say, stay safe? Sounds so ridiculous “there is nowhere safe in Sanaa”.  Then the muffled exclamation..they have hit the old city.  Incredulity and a tipping point.  Saudi Arabia has already committed endless crimes against humanity in Yemen, blockade, starvation, wholesale slaughter of civilians, the targeting of a maternity and premature baby hospital, the use of illegal, lethal and hideous WMDs but somehow the ancient city of Sanaa was sacrosanct, not any more.

Last night the Saudi jets spat out two US or UK made bombs over the holy city.  These bombs hit their target and destroyed a part of this city that has withstood 2, 500 years of history unscathed.  These bombs crushed a family as they cowered, petrified in their homes. The father was a simple farmer, not a soldier, a civilian.  He believed in his right to freedom, that was his only crime for which his entire family was wiped out in the strike.

As the dust and smoke cleared this morning, his little car was found still intact, still full of his meagre belongings.  The only reminder of his existence in the trail of death and devastation left in the wake of the Saudi jets that pounded Sanaa mercilessly last night, sparing nothing and no-one, not even history.

This morning the recovery and clean up started..images of people, dazed and disbelieving, wandering desolately through the dismembered buildings, strewn beneath their feet. Picking through the debris, searching for what, for a reason for this insanity, for this barbarity?  When did their simple life become this turmoil, this incessant drumming of fear and death? When did their music pool at their feet in a throb of terror and trauma? When did their dreams become their death knell? When did their children become ghosts?

A little girl in the midst of the rescue workers, stands dazed and dishevelled.  A dot of blue against the dust and stone, her face registers only shock and disbelief. She is the loneliness of Yemen, starkly silhouetted, alone against this backdrop of bloodshed and tears.  Standing brokenly, defiantly against all that is wrong with the world.  Silently suffering, voiceless, wordless, screaming inside for the help that never comes.  Crying the tears that creep through the dust and dry unnoticed on the graves of their fallen.

It is our silence that must be shattered,  not this child nor the next. Too many broken  babies litter the sands and the valleys of this dazzling country for us to count.  Will we pick through their remains and mourn their splintered, lacerated corpses or will we raise our voices for those that cant be heard above the symphony of terror being played by the House of Saud with their US & UK instruments of death. Yemen must know they are not alone.