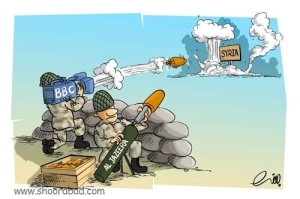 Mainstream media have reached a new low this January as they purposely manipulated human suffering – engineered human suffering I need to add – to serve very political agenda. While this reality is not in the least surprising, such new propensity to exploit aggravated humanitarian crises to score imperialistic points is downright sickening.

Here I was under the impression that media, and of course journalists had a duty to the truth, and the people they are meant to serve … What an awakening it was to see reporters and pseudo-analysts serve their readership outraged prose over the injustice civilians have been forced to endure under the tyrannical rule of mad men drunk on power, in the service of misinformation.

Madaya, a Syrian village located 40 kilometers northwest of Damascus, the seat of Syria’s legitimate government. At the heart of such a media frenzy – this sudden concern over the welfare of some tens thousands of so souls, the demonization of Syria’s Resistance movement against terror, and imperialism. 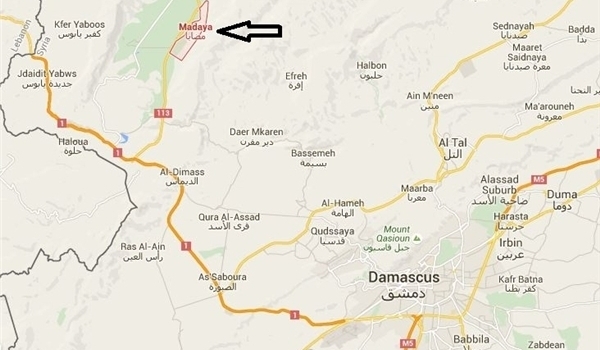 Syria is fighting two wars: one against Wahhabi-led terrorism, and one against foreign imperial occupation. Sandwiched in between two modern forms of fascism: liberalism and Takfir Salafism, Damascus has been locked in a bitter battle for survival. President Bashar al-Assad, whether western capitals care to admit or not has become a rallying flag for his people – the one institution to have risen a tower against those powers which continue to threaten the integrity of Syria’s territories.

Of course President al-Assad was portrayed as a villain in order for Western capitals to justify the lead and fury they have unleashed since 2011 onto a land which committed no other crimes but to have fallen prey to an engineered Wahhabi takeover. Make no mistake, Syria’s revolution was orchestrated to depose all, and any opponents to western-led imperialism. And if indeed many Syrians genuinely came out to demand reforms in the early days of the so-called Arab Spring,  calling upon Damascus to listen to their plight, we need to seriously question how exactly it is that Syria became a playground for Wahhabi militants.

Is not true after all that wherever Western powers have invoked military intervention, Wahhabis have followed in toe, raiding and plundering to the tune of neocons’ cries for decisive actions. If anything it is western interventionism which has allowed for the spread of terror. From Africa to the Middle East and Asia, continents have burned red under the Black Flag army’s blade.

But back to Madaya.

Madaya has become corporate media new chew toy – a tool it has wielded to send shivers down the spine of well-thinking readers whose empathies will be incensed before images of starving children. Anger and fury  were exactly what media wanted the public to feel vis-à-vis President al-Assad – paving the way for a new type of warfare – humanitarianism.

From the Vice News, to the Independent, the Telegraph, the BBC and CNN, most media have jumped on Madaya’s bandwagon, spewing misinformation and half-truths to a public which has learnt to never question the Establishment.

“Public outcry and condemnation against the Syrian government spread like wildfire across mainstream news and social media when the horrific photos of starved children and civilians from the besieged town of Madaya emerged.”  ~ wrote  Paul Antonopoulos for Al Masdar News.

Systematically, purposely, the public was told ad nauseam that President Bashar al-Assad was to blame, that it was his administration and his army which had besieged and starved Madaya on account villagers had rebelled against his rule …

Only THAT was the manipulation. If Madaya has been indeed starving, it was not by Damascus’ design, and it was certainly not over any rebellion. Madaya holds no grudge against its government, Madaya actually has been calling and crying for its government to intervene.

Madaya has suffered a tremendous injustice, one made worse by media manipulation, as the pain of a people was exploited to sell governments’ propaganda, and advance their humanitarian complex narrative – the new veneer behind which imperialism is hiding behind.

But how far does the rabbit hole goes, and just how many lies were manufactured?

This photo was published by Saudi owned Al-Arabiya to exemplify President al-Assad’s tyranny. This photo was used to back calls for humanitarian intervention – the new optic neocons have been pushing forward of late.

It was soon revealed that the young girl in the right is in fact a south Lebanese, and that unlike what media claimed is not suffering in the slightest as she is safely home, with her family, loved and cared for.

7-year-old Marianna Mazeh from #Lebanon: “I live in Tayr Filsey, not #Madaya, and I am fine,”pic.twitter.com/iplJmpxMqn

Then this was published in al-Jazeera, a Qatari-owned media well known for its Saudi sympathies.

The man in the photo presented as yet another victim in Madaya is in fact not, rather, the image was recycled from 2009 – that man of a refuge in Europe.

Then came despicable, then came the lowest of all lows when media played Palestinians’ pain and suffering to sell war in Syria.

This malnourished baby ‘from Madaya’ actually turned out to be a child from the Yarmouk Palestinian camp on the outskirts of Damascus. The photo was taken in 2014.

Madaya has been under radical occupation – this is a fact which has been verified by the Red Cross and observers on the ground. Back in October the Red Cross managed to deliver humanitarian aid to the city – only food, medicine and other vital supplies were requisitioned by Wahhabi-militants as spoils of war. While militants gorged on stolen aid, villagers were left to wither away.

But not only that, Madaya was supposed to have enough food supplies for two months, and so media talks of acute starvation do not align with reports from the Red Cross that supplies should have carried the town until the end of December.

A report from RT read: “For the past two weeks, first the Western-backed Syrian “activists” and then the mainstream media reporting their every rumor as gospel truth, began spreading stories about the “Assad regime” deliberately starving some 40,000 civilians inside Madaya, a former resort town 25 miles northwest of Damascus. Sordid stories splashed across the front pages of the Anglophone press and social media, claiming the government in Damascus was deliberately withholding food from innocent civilians “for months.”

Truth, the last convoy of food to reach Madaya was promptly seized by the anti-government rebels holding the town. The rebels have been selling the looted food at exorbitant prices, to the few locals who could still afford to buy. One of the residents spoke to RT of $30 for a kilo of rice; it was even worse, it turned out, with prices running as high as $250.So, it wasn’t the demonized Syrian President Bashar al-Assad personally overseeing the starving-out of Madaya, as one might think from the media coverage – but the very same “democratic moderates” backed by the West, who invented the narrative about the “walking skeletons of Madaya” and fed it to the gullible press.”

Madaya was set up as a false humanitarian flag to better distract the public.

Vanessa Beeley, a expert on the military and human rights complex wrote on her blog,thewallwillfall:

“As evidence mounts, pointing to Western media and Governmental manipulation of the facts and exploitation of the misery of the Syrian people, we see an almost ghoulish relishing of their role as purveyors of deceit and harbingers of further suffering for Syria.”

Madaya has suffered by the hands of the very militants Washington, and other western capitals have been so eager to paint as “moderates” – those militias the public were told would bring stability back to Syria and help introduce democracy. Only Syria is already a republic, only Syrians never asked for their land to be sacrificed to the altar of Wahhabism so that neocons could have at it with its natural resources.

Madaya was saved by Damascus!

It was both the Hezbollah and the Syrian army which exerted so much pressure onto al-Nusra and its sisters in hate, that radicals eventually bowed to their combined greater will. And so when you read today that the Red Cross was allowed in following weeks of wrangling, remember it is the hands of the Resistance which brought salvation to Madaya.

Earlier this week, US Ambassador to the United Nations, Samantha Power issued a scathing statement earlier in which she denounced the suffering imposed on the people of Madaya, falling short of calling the crisis a holocaust.

“Look at the haunting pictures of civilians, including children, even babies, in Madaya,” she told the UN General Assembly, adding “These are the pictures we see. There are hundreds of thousands of people being deliberately besieged, deliberately starved right now, and these images remind us of World War 2.”

There is such a repulsive degree of hypocrisy and selectivity  in US officials’ outrage … no such words were ever spent on Yemen over Saudi Arabia’s organized humanitarian blockade, no such words were uttered before the suffering imposed on Bahrain by Saudi military occupation.

Over 20 million Yemenis are grave need of humanitarian – on THAT crisis nothing but deafening silence. When Sheikh al-Nimr was beheaded for speaking words of peace and democratic reforms, western capitals offered but meek opposition. As Saudi Arabia stands the fountainhead of all things abject and foul, nothing BUT quiet acceptance has emanated from the West.

Human suffering and injustice should be systematically opposed and denounced, beyond any religious, political or ethnic criteria.

It is a shame neocons checked their souls at the door!

Catherine Shakdam is a political analyst, writer and commentator for the Middle East with a special focus on radical movements and Yemen. The Director of Programs at the Shafaqna Institute for Middle Eastern Studies, Catherine is also the co-founder of Veritas Consulting. She authored Arabia’s Rising – Under The Banner Of The First Imam.