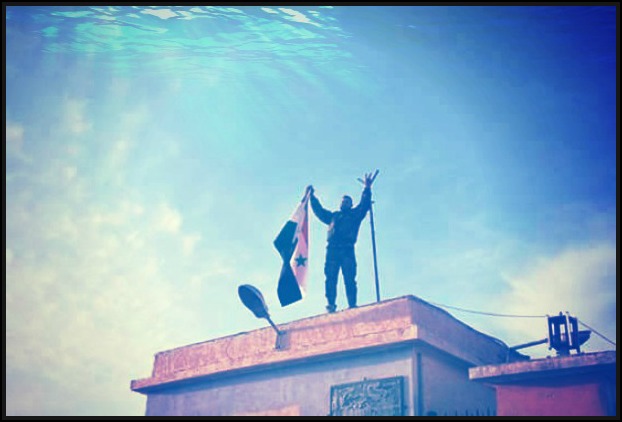 As on a calm, still morning, the landscape of Syria is gradually emerging from the shadow. Everywhere, the advances of the Syrian Arab Army have reconquered thousands of square kilometres of territory in East Aleppo, Homs and Damascus. The army is on the verge of retaking full control of the Syria-Jordan and Syria-Iraq borders, traditional rat runs for the foreign mercenaries intent on destroying the cradle of civilisation for a fistful of petrodollars.

Restoring the sovereignty of the Syrian state on its national soil, this courageous army of conscripts, inflict shame upon all those who dreamed of destroying this recalcitrant state, upon all those who wanted to dismember Syria because it dared to foil their neocolonialist plot. 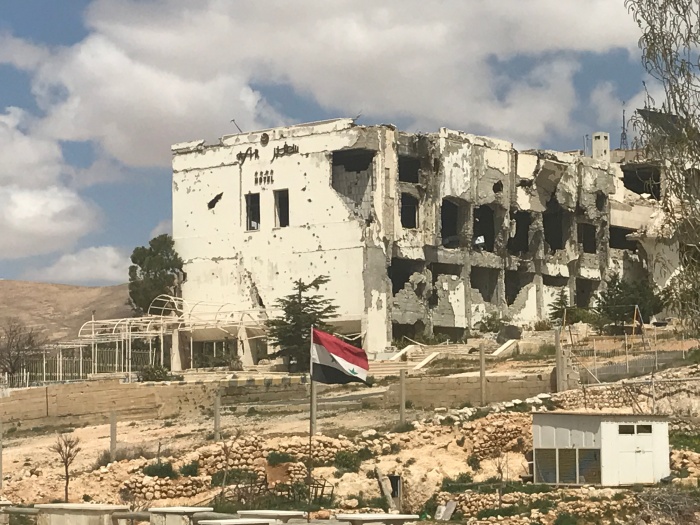 Victorious on the military front, since the liberation of Aleppo, the sovereign state of Syria is also making huge advances politically. In the distant past, Le Monde “diplomatique” was able to predict, without fear of ridicule, the ‘golden’ exile of the Assad family in the wilds of Siberia. The Syrian president has watched his adversaries file past, chanting the same ridiculous mantras against a country they knew nothing about. According to the West, President Bashar al Assad’s departure was a pre-requisite for the crisis to be resolved. The reality was the opposite. The resistance of the Syrian state, for which the president is the touchstone, required his steadying hand. Where so many others would have fled the battlefield, the commander stayed at his post and did a good job. 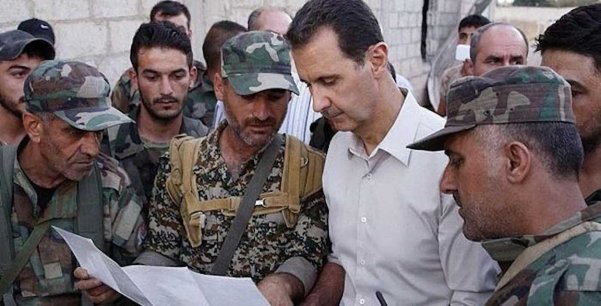 Fervent admirer of Al Qaeda, Laurent Fabius told us that the head of the Syrian state did not deserve to be upon this earth. Bad call! While Fabius practices his global ethylism in the Constitutional Council, President Assad still leads his country from Damascus. The Syrian army is eliminating the plague of sectarian groups, whose triumph Fabius had envisaged and the Syrian people can taste the rising hope from the last stages of the war. What is most startling from western leaders, is their tendency to speak too soon. For six years, their echo chamber media recycled the headline that the Syrian government was about to fall. Luckily for those journalists, they are not paid on the result. 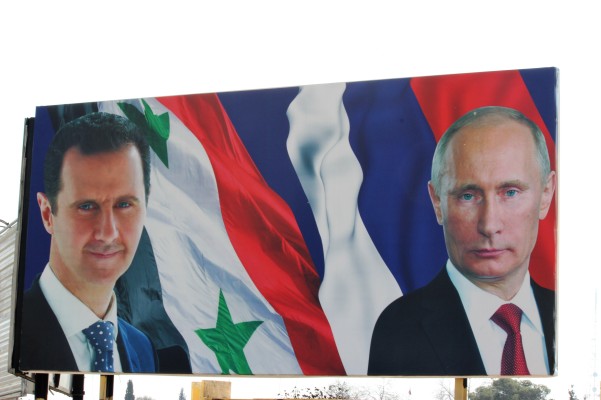 To fully understand the reasons for the Syrian resistance against an unprecedented international offensive, one only had to consult reliable sources and to employ critical thinking. Even though the propaganda merchants would have us believe that the people had unanimously risen up against a “tyrant”, overwhelming popular demonstrations in favour of the Syrian government and its reforms actually flooded the streets in March and October 2011, as shown on Al Mayadeen’s TV channel. These popular rallies proclaimed their allegiance to the nationalist, secular state and vociferously rejected the Wahhabi sharia law. These crowds poured onto the streets of Damascus, Aleppo, Tartous and elsewhere. Western media stubbornly kept their cameras trained only on the ‘bearded’ gatherings, depicting them as the popular uprising. 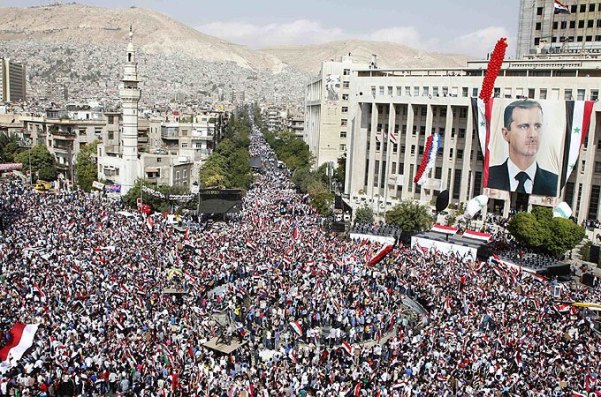 October 2011 – Tens of thousands of Syrians have rallied in central Damascus in show of support for President Bashar al-Assad ( Photo: Al Jazeera )

The primary facts, indispensable to the understanding of the unfolding events were not given any coverage by mainstream media, that, instead, presented only the pre-fabricated ‘facts’ that served the ‘cause’. The “moderate rebels” massacring the families of the Baathist civil servants, for example, were transformed into the security forces “firing upon civilians”. Of course we could have predicted this sequence of events, knowing the extent of the involvement of the Washington neocons.

“While you speak of the reality we are creating, we will create a new reality” said Karl Rove, advisor to George W Bush and distinguished apostle of “constructive chaos”. 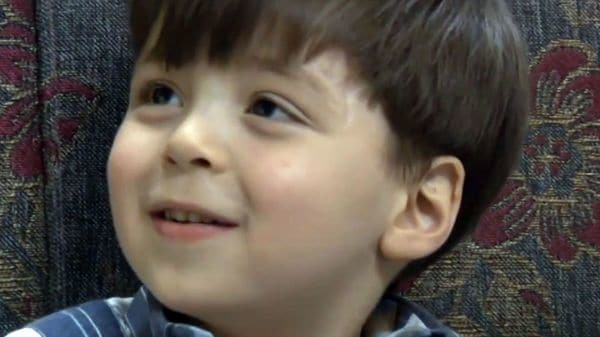 Omran Daqneesh, the “face of the suffering of Aleppo” according to mainstream media, alive and well and living with his family in Syrian Government controlled west Aleppo.

Fortunately, there comes a time when the factual evidence cannot fail to dispel even the most insidious of lies. It is difficult to maintain the universal nonsense when entire populations are clearly fleeing the “rebel” areas, when the army is reconquering, bit by bit, every inch of its sovereign territory, and the Syrian government is indubitably benefiting from the unfailing support of its allies. Having renounced the habitual formula of the “regime on its last legs”, western media has also been forced to abandon its customary skepticism regarding the “trompe-l’oeil victories” of the Syrian state. For sheer amusement value, I hope they have kept their archives of articles informing us that the Russians and Iranians were about to desert Bashar al Assad and that the “despot was finished”. Only Jean Pierre Filiu, like a cracked record, persists in denying the existence of the Syrian Arab Army but one wonders what planet he is living on. 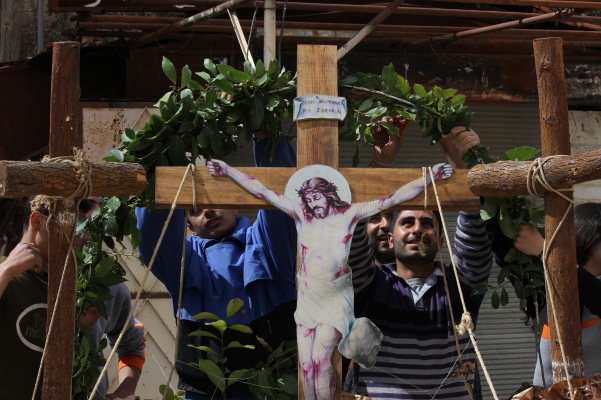 Victorious militarily against the takfiri militants, supported by the huge majority of the Syrian people who want to see an end to the tragedy, fortified by alliances who strengthen the resistance, sovereign Syria can finally see the light at the end of the tunnel. Imperialism is not accustomed to loosening its grip so the road will still be long and treacherous but the favourable evolution of the desert warfare augurs an acceleration of events. The military provocations of the US will change nothing, they are merely the rear-guard actions of the declining power. The latest aggression, the shooting down of a Syrian SU-22 by an F-16 close to Raqqa, had the sole effect of torpedoing Russian-US cooperation against DAESH with Moscow announcing that any foreign aircraft would now be considered a target for the Russian DCA. 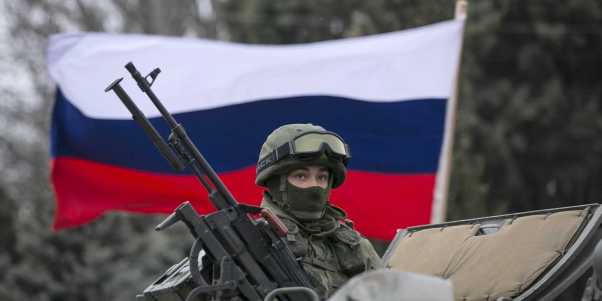 This US provocation also incited Iran to conduct their first mid-range missile launch against DAESH inside Syrian territory. Up until this moment, Tehran had maintained a discrete military involvement in Syria but the Washington muscle flexing forced its hand to a more critical use of force. In fact, this rise in tensions serves Damascus, and their strong condemnation of western presence on its sovereign territory. It also serves their ally, Russia, whose credibility goes up a notch, with every US provocation. 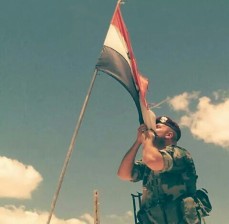 Even if they succeed in taking Raqqa, the Kurdish-Arab allies of the US will discover it is a hollow victory and the Syrian Arab Army will soon be back in control. DAESH will shortly be driven out of their pseudo-capitals, Mosul and Raqqa, deprived of the supply routes and caught in the pincer movement of the Syrian and Iraqi forces.

But that’s not all. A Wall Street Journal investigation has provided valuable information about Israel’s support for the Syrian “rebels” who, in return, assure they maintain custody of the Golan Heights. With scant concern for this kind of additional information, the New York financial journal does however recognise the irony of the “cash” received by the militant leaders. When Damascus has dealt with DAESH, these collaborators with the occupier will have cause for concern. As for the pseudo-defenders of the Palestinian cause who demanded weapons for the “Syrian revolution” their malicious intent is clear. 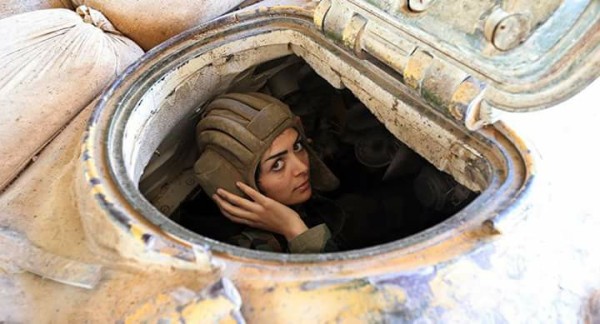 “To provoke the fall of Bashar Al Assad is the best way to protect Israel”, wrote Hillary Clinton. After six years of lies the masks are falling. Syria confronted the Zionist invader in 1948-49, 1967, 1973 and 1982 and it never capitulated. Today, the hour of truth is fast approaching, but we already know who has won the war.

7 thoughts on “VICTORIOUS SYRIA: The Axis of Resistance Confounds the Forces of Empire”