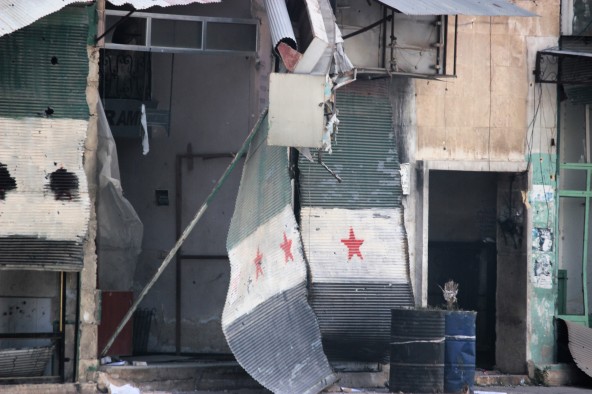 Remains of a Nusra Front-led extemist militant centre in Hanano, East Aleppo after liberation by the SAA and allies, December 2016. (Photo: Vanessa Beeley)

Since 2011 the United States government, led by President Barack Obama, has adopted an open policy of supporting an armed opposition in Syria. While certain officials have only recently admitted to arming and funding these militants, evidence shows that the support has been pouring in through both covert means and official channels from the onset of the conflict. We now know that those commonly referred to in the western media as “rebels” in Syria are comprised mainly of religious extremists and designated terrorists.

Despite this revelation, the US, UK, France, along with Saudi Arabia, Qatar and others have continued to back them, and even go so far as to color them with political legitimacy – all in a grand effort to try and achieve regime change in Syria. It’s not the first time either that Washington has pursued this same policy of destablization in order to overthrow a foreign government.

President Donald Trump has an opportunity to reverse this backwards US policy. Will he capitalize on the opportunity to start anew, or will the US revert back to its old deep state default position? The passage of Hawaii Congresswomen Tulsi Gabbard’s recently proposed piece of legislation entitled, Stop Arming Terrorists Act, would be positive move in that direction. Will President Trump champion her bill?

To the Government of the United States of America:

I am asking my American government to stop supporting terrorists in Syria. The US government, and media, keep calling them ‘moderate rebels’, but they are not.  They were never moderate, and many are not rebels. By definition, a ‘rebel’ is rebelling against their own government.

From the out-set of violence and crimes in  Syria in  2011, the US backed ‘rebels’ used sectarian slogans, and carries out sectarian attacks and massacres. Syria is a secular form of government, as is USA.

Why would American leaders support the targeting of minorities in Syria, when the President of America is himself a minority?

Why would the US government support the destruction on churches and mosques?

American’s value religious freedom, and equality of minorities; yet the US backed ‘Free Syrian Army’ destroyed churches, targeted Christians, attacked Christian villages, as well as targeting Muslim minority sects with similar acts: such as Kessab, Ballouta, Mahardeh, and Maaloula among many others.

The US government sent weapons, missiles, special training, equipment, food, medical supplies, communications, and satellite imagery to the Free Syrian Army from 2011 to 2016.

Yet, the current exodus of evacuees from East Aleppo has not received even one loaf of bread from USA.  While the US backed FSA had many warehouses full of food and medicines they have left behind as they retreated deeper into East Aleppo.

Finally, the ‘rebels’ who agreed to vacate recently have burned all the medical supplies and food storages, which were the gifts of the American taxpayers, so as to prevent the distribution of those  supplies to the starving masses who have fled East Aleppo now.

American citizens are currently very concerned about Syrian refugees coming to USA who may have had ties to terrorism.  The US backed ‘rebels’ are exactly the type of people the American citizens should be afraid of as possible new neighbors, living in their midst as settled refugees.

They are the type of people who would chop off the head of their neighbor because his religion is not exactly the same as theirs.

They are the type of people who are willing to take money from a foreign government for the purpose of destroying their own community.

They are the type of people who do not value religious freedom, or minority rights.

What would happen when the US backed ‘rebels’, who may be settled in USA, decide to rebel against the American government? Will the US President and Congress call them ‘freedom fighters’? Or, perhaps America’s enemies will fund and support their armed attacks on the US government and civilians?

We should all be united in our plea: please stop supporting terrorism  in Syria, and around the world.

21WIRE Special Contributor Steven Sahiounie is an American citizen born in Fresno, California.  He has been living permanently in Latakia, Syria, which was his father’s original hometown.  Steven is a freelance journalist and University student studying English Literature.